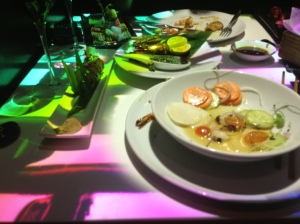 I’ve wanted to try Inamo in Soho for a while but was waiting for the right opportunity. I met up with a couple of friends last week and we haven’t been out together for a while, so I thought it’d be an interesting venue for our catch up. Because the main reason I knew about Inamo (and probably why most people go in the first place!)  is due to its unique ordering system. Rather than getting a menu and ordering via a waiter or waitress, at Inamo the tables are interactive and you view the menu and order straight from the tabletop. It’s obviously a novelty, but judging by how busy the place was, and someone ringing me to reconfirm my table the day before my reservation, it’s a novelty that is working well! The Inamo website (www.inamo-restaurant.com) states that the cuisine is ‘Oriental Fusion’ with influences from Japan, China, Thailand and Korea amongst others.

Located right in the centre of Soho on Wardour Street, Inamo is very centrally located and easy to get to. It was actually a lot smaller than I expected and the restaurant was absolutely full when we went. The atmosphere was lovely – lots of hustle and bustle, but not too loud or overpowering. The lighting is dark so that the tables themselves become a central design feature. One of the many things you can do with the touchscreen tables is change the image or pattern projected onto the tabletop, and that really can alter the environment you create for yourself. The novelty of the ordering system meant that initial conversation stopped whilst we all played with the screens, but it was a great conversation piece overall and each individual orders their own dishes/drinks, but you can easily see a running total of the items you have ordered individually AND the total for the table. This could actually be good if you were in a group who wanted to split the bill by what they ordered – it saves the maths problem at the end of the meal!

Before arriving at the restaurant I was a bit concerned we’d be rushed through. As soon as I got my booking confirmation it made quite a big deal that we would only have the table for 90 minutes. And this message was reiterated by the server who seated us. And whilst I understand the need to turn tables, I really don’t think 90 minutes is that long. I’ve been to restaurants far more ‘in demand’ than Inamo who at least let you have a table for 2hrs (I’m thinking Nobu and Galvin La Chapelle here). But actually, we were not hurried out after our 90 minutes were up, although I have no doubt if they needed the table urgently we’d have been told to get our coats!

The ordering system was fun, but you can’t compare dishes very easily like you can in a regular menu (by flipping back and forth through the pages). So I spent ages scrolling through dish after a dish trying to work out what I wanted. Once you hit order it sort of ‘saves to your basket’ so you can total up what you want, and then delete if needed before actually submitting your order to the kitchen. I enjoyed the process, but I reckon people might get a bit carried away as it somehow takes more effort to keep tabs on how much you’re spending, particularly if you order a series of small dishes (sushi etc). But overall, a really enjoyable experience.

So once you’ve played with the table, what then? Well the food was pretty decent actually. Two of our party ordered a series of small dishes to share and these were, on the whole, very nice. I particularly enjoyed the Squid and Spring Onion Dim Sum and the Tuna Maki – both were full of flavour. I actually thought that the sauces and dips that came with a lot of the small plates were the stars of the show – fresh, zingy and spicy. I was a little disappointed with the portion size of the Miso Grilled Seabass although, again, the flavours were fantastic and the fish was perfectly cooked. And the Wafu Salad as a side dish was initially a little disappointing to look at, but ended up being a great addition to the meal.

Portion sizes for the smaller dishes were to be expected, but did come up a little tinier than I’d hoped for. However, one of my friends went for a main dish of Malaysian-Style Noodles which was quite a huge bowlful, so perhaps I’m being a little unfair.

I think this is where I have a problem. In writing this review I’ve realised that I really did like the food and the atmosphere, as well as the interactive tables. But my overwhelming feeling when I left was ‘That was quite expensive and I’m still hungry’. You can definitely get better quality food which will cost less in London – particularly Japanese. I feel that you pay a significant premium for the novelty and whilst I’m not saying that I wouldn’t go again, I would order differently. And I wouldn’t go back with the same people, if that makes sense – now I’ve shared that experience with those particular friends, there’s nothing that would make me want to revisit Inamo with them. The food and value just isn’t good enough for me. But if someone else wanted to try it out for the first time, I’d go along too. Overall, I would recommend people try this place – it’s unique and the food is good. But I would always back this up by saying you’re going for the overall experience, not just the food. There’s other places that look a LOT shabbier than this place, but the quality is in the food not the decor! 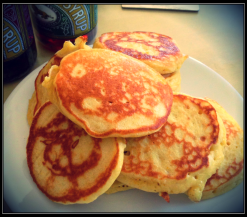 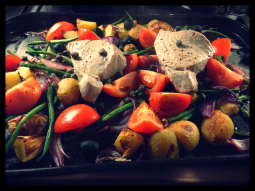